FOR THOSE WHO DON’T KNOW… 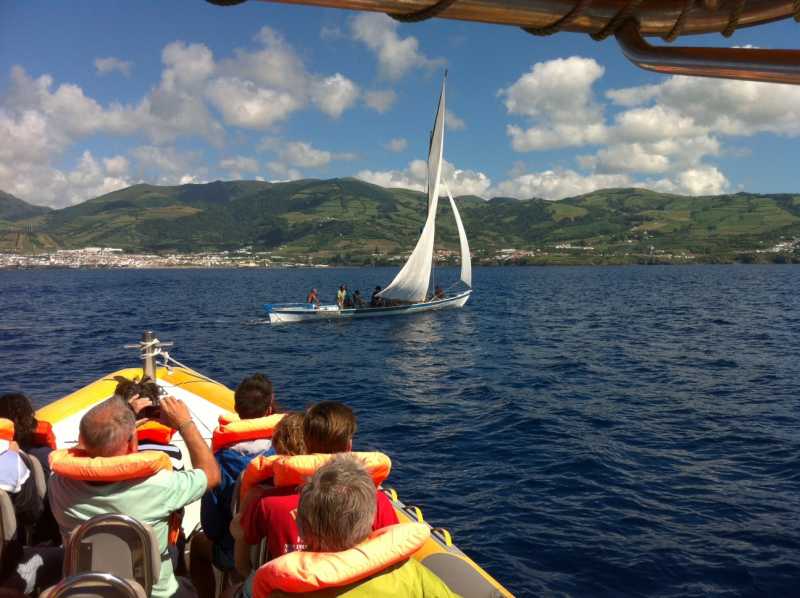 Men, Ocean and Whale’s linkage is antique in Azores. Sperm whale hunting derives from American early XIX century whaling activity. Herman Melville’s famous novel Moby Dick remarks the hard working capacity, talent and resilience of Azoreans once recruited on whaling ships operating the Atlantic and far Seas. This was the opportunity to escape from the islands’ misery and starvation, paying with tears and sweat the ticket for the «American Dream».

Some whalers became great Captains on sailing vessels. Some came back to the islands hoping for a new start. With knowledge, capital and motivated to earn life decently a new activity displays. The island becomes the «whaling vessel» for the whale hunting… Along the islands shores several small stations provide new incomes to uncertain family earnings. There was a profitable market demanding for whale oil.

Whale hunting in Azores is unique! On his 1954 book “Open Boat Whaling in the Azores: The History and Present Methods of a Relic Industry”, Robert Clarke describes an activity similar to the American 100 years before. Traditionalist society, low means and the islands remoteness contribute for a conservative atmosphere. Simple but brave men facing rough oceans and giant sea creatures in fragile sailling wooden boats (botes baleeiros) only with a harpoon but a huge amount of courage, is a good image of Azorean whalers.

They kept doing it for many years until 1986. When Portugal joined European Union whaling was abandoned. During more than two centuries, technological progress in this activity resumes to the introduction of motor boats (lanchas) to tow the boats, autoclaves to process whale fat and radios on the Vigias. Even at the peak of industrial whale hunting during the II World War whale hunting methods remain unchanged as «relics from the past».

Whale Watching today has major importance for islands tourism. Visitors seek special moments in contact with Nature; searching exclusive whale flukes or spinning dolphin photos; opportunities to discover the secrets of marine wildlife. Embarking in modern fast [and beautiful sun-flower-yellow] boats, assisted by an experience skipper and a naturalist, Ecotourists learn about marine wildlife biology, ecology and conservation. They learn to respect Nature and become aware of the threats of moderns civilizations.

Offering visitors the «entire picture», to promote authenticity and genuineness , TERRA AZUL has rebuilt the (only) traditional whale boat existing in São Miguel Island. We strongly believe these boats are icons of Azorean culture and heritage connecting people with the ocean. As contemporary memories of an old-style activity and virtuosity remains of traditional knowledge and creativeness of local boat builders and whalers.

Now our whaling boat “Senhora de Fátima” spreads this remarkable lesson to the World: it is possible to continue to «use whales» without killing them! This boat as a symbol of Azorean Identity endorses a link «from Whaling to Whale Watching». Tourist and locals enjoy the pleasures of sailing a traditional boat while they learn about whaling history and traditions.