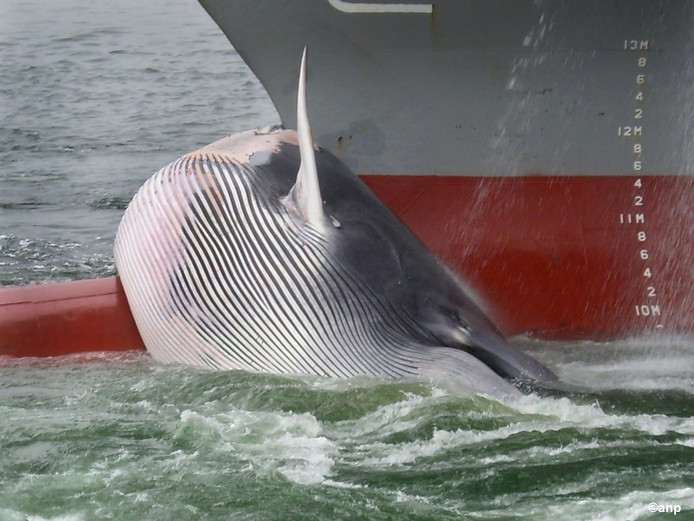 Maritime transport keeps increasing and becoming more efficient for our benefit, however for someone else this means more troubles. The intensity of traffic and the use of larger and faster cargos and ferries is a real concern for whales which may suffer serious accidents. The probability of collisions is in fact increasing its frequency since the last two decades, and there is a strong concern for the viability of populations of already endangered species such as the northern right whale.

When accidents occur, injuries are usually severe and include broken bones, deep wounds, haematomas and haemorrhaging, which in most cases lead to immediate death. Northern right whale calves seem to be particularly vulnerable to ship strikes, however if the victims are female whales accompanied by a calf, it is possible that their calves, if still very young may end up dying as well.

Deep wounds from ship propeller on the flank of a humpback whale (image source www.sanctuaries.noaa.gov)

The vessels involved often are not aware of the collision, as it happened on three occasions between 2011 and 2013, when three juvenile fin whales were bow-caught by containerships and brought to Rotterdam harbour. This suggests that ship strikes frequency may be greater than we think, making it more difficult to control.

Sperm whales are also affected, not only baleen whales. An example is a well-known young sperm whale individual which was struck by a vessel in the Canary Islands. The young male was known to have occurred in the Azores waters since 2004 (Lisa Steiner, Whale Watch Azores). 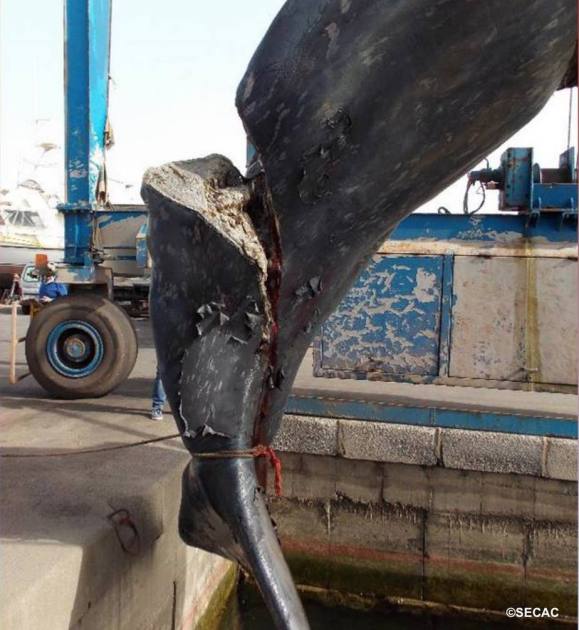 Broken tailstock of a young sperm whale as result of a collision with a boat in the Canary Islands. This individuals was very well known in the Azores

Speed seems to be the main factor for these accidents to occur. Whales might not have the time to change direction or to dive deeper in order to avoid the upcoming vessels. The vulnerability increases when they are resting or when they are surfacing after a dive. Recent studies focused their interest in trying to figure out the maximum speed at which whales could be still able to flee without getting injured. Specifically, it was found that the probability of a lethal injury increases with increasing speed and in reaches 80% at 15 knots. Below 11.8 knots the probability drops to 50% while above 15 knots it reaches asymptotically 100% (Vanderlaan & Taggart, 2007).

Unfortunately, ship strikes are not the only threats for cetaceans, however they are critical enough to be further investigated in order to provide the best mitigation measures possible.