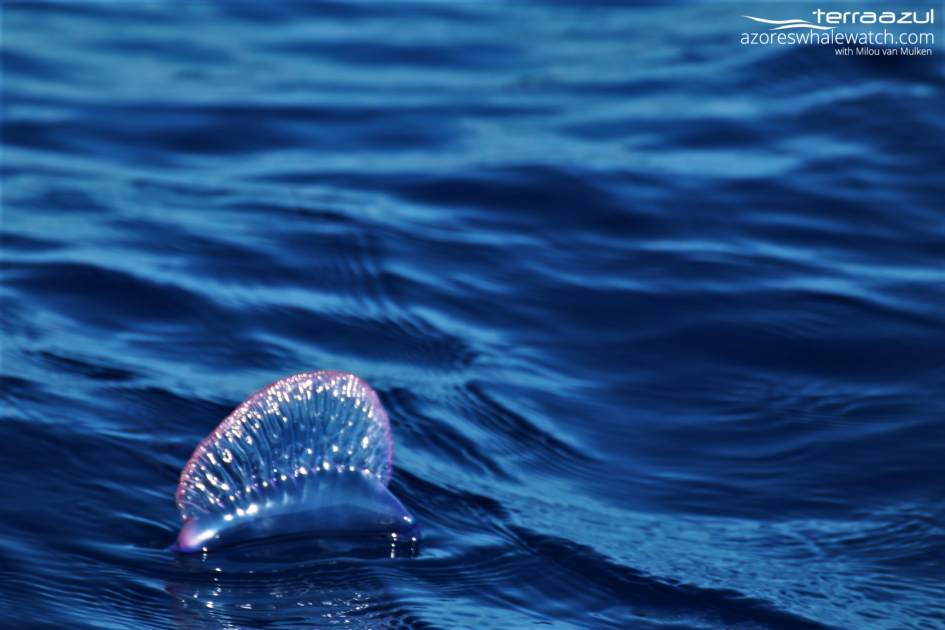 If you have been out on São Miguel water recently, you might have seen several pink, blue or purple inflated sails drifting in the currents.

Known as Portuguese Man O’ War (Physalia physalis), they are organisms belonging to the Cnidaria Phylum, the same that includes jellyfish, coral polyps and anemones. And when I use the plural, it is because everyone of them is formed by multiple colonial polyps – also called zooids – that work together to live, exactly like an old time Man o’ war vessel!

All the zooids belong to the same species but differentiate in several types to assolve different vital functions, from the siphon inflated with gas that sustains the colony, to the long stinging tentacles used for hunting small fish and plankton. Their venom is extremely painful and can even be deadly for humans, especially if multiple stings occur.

Interestingly, the zooids are connected by a nervous network and are physiologically integrated to such a degree that they would not survive independently. They are even able to react in case of attack from above deflating the siphon and submerging completely the colony!

Portuguese Man O’ War are predators but also preys. In particular, Loggerhead Turtles (Caretta caretta) often feeds on the tentacles as turtle’s tongue and throat skin is too thick for the stings to cause any harm. Here in the Azores, it is not uncommon to see Portuguese Man O’ War with really short tentacles for the recent attack of a turtle!