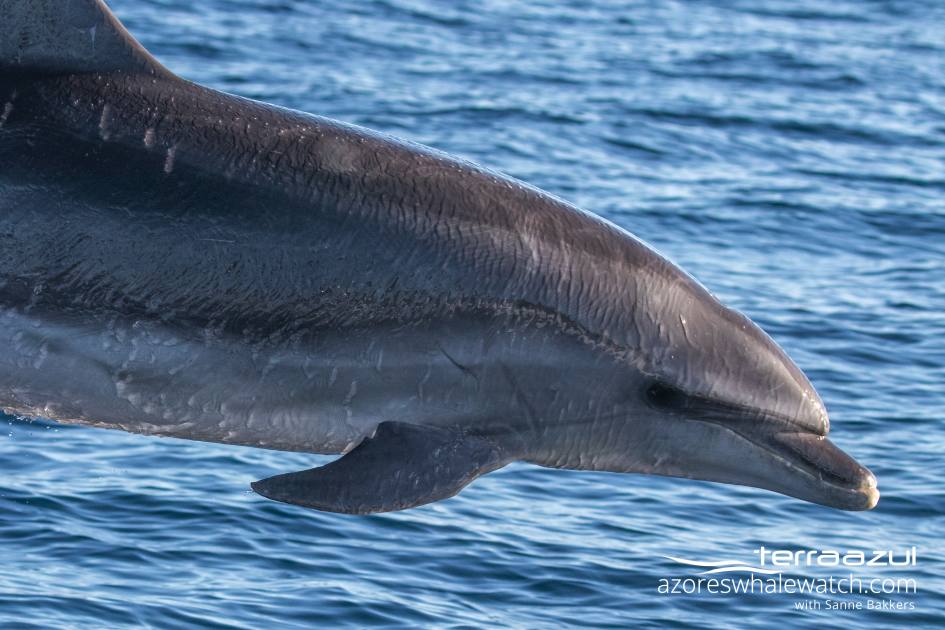 Whales and dolphins are not the only kinds of wildlife that we encounter during our tours. We often see seabirds, and occasionally we find sea turtles, sharks, rays and other fish. Our first tour in December not only gave us wonderful cetacean sightings, they also allowed us to find a bird species that is considered to be a rare visitor in the Azores. 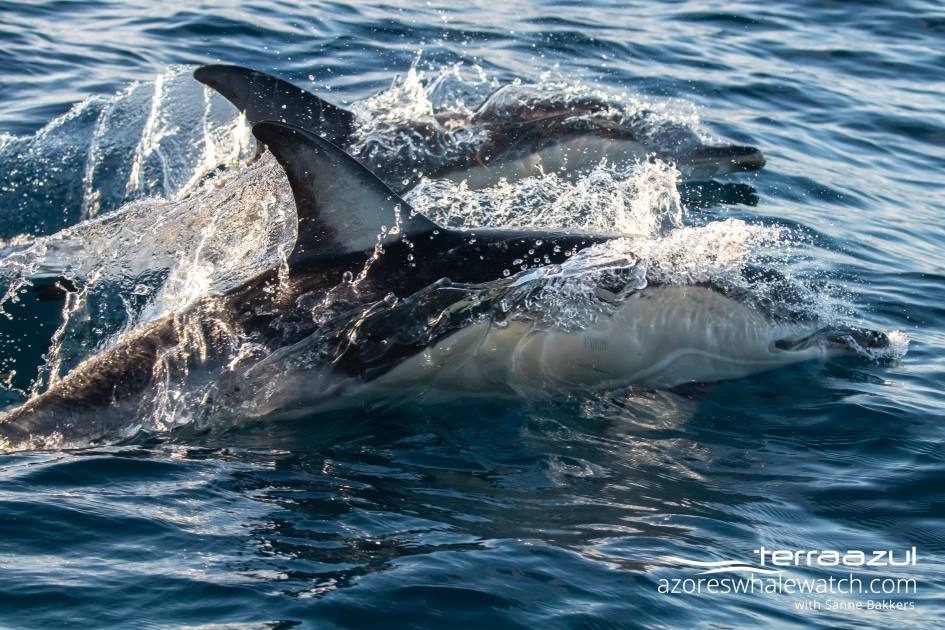 On the 2nd of December, we began our morning with a sighting of Common Dolphins (Delphinus delphis). It was a group of circa 40 adults and juveniles travelling west in front of Água de Pau. After 10 minutes it was time to move on and we went to see a pod of about 20 Bottlenose Dolphins (Tursiops truncatus). Just like the smaller common dolphins, these large dolphins (up to 4 m in length) came over to our zodiac to swim closely beside us. We discovered one small calf amongst the adults and juveniles. The moment we started leaving this group, one adult separated from the rest. We were already a 100 m away, and yet this individual came flying towards our boat as soon as we increased our speed – stiffening and stretching the body mid-air. We see this behaviour a lot in Atlantic Spotted Dolphins (Stenella frontalis), but rarely in bottlenose dolphins. Isn’t it incredible how attracted some individuals are to the pressure waves created on our bow?! 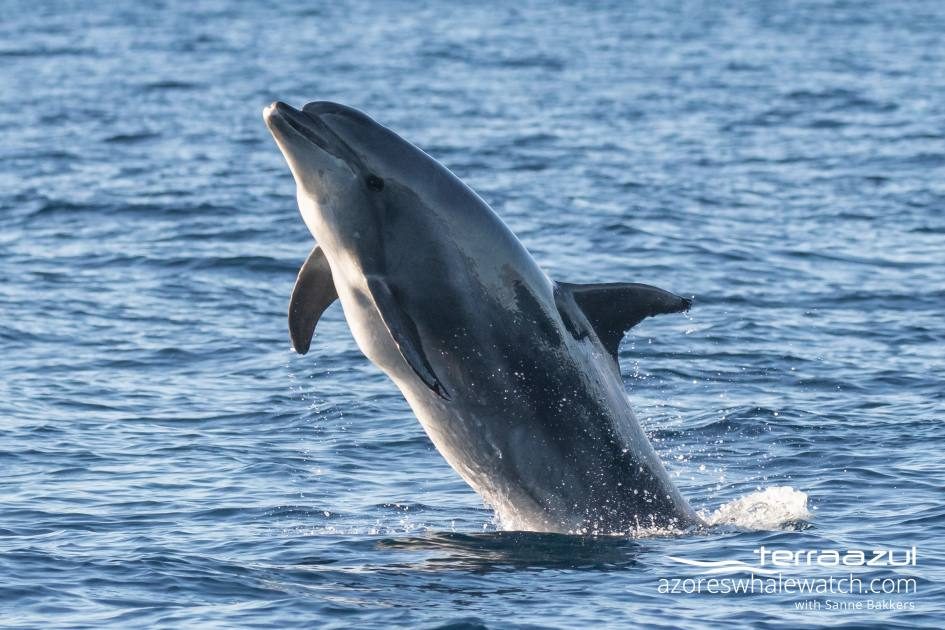 After seeing the two species of resident dolphins, it was time to visit a migratory species. We were pleasantly surprised to have a Sei Whale (Balaenoptera borealis) crossing the area in December. In fact, it is the first time we entered a sei whale sighting record in MONICET for the month of December. 🙂 This whale was not easy to follow – diving often and changing direction as well. She made us work for it, but we managed to see her well a few times. Since we were quite a few miles away from the coast, south of Ponta Garça, we could not stay too long. It was a long way back to the islet of Vila Franca do Campo and our harbour! 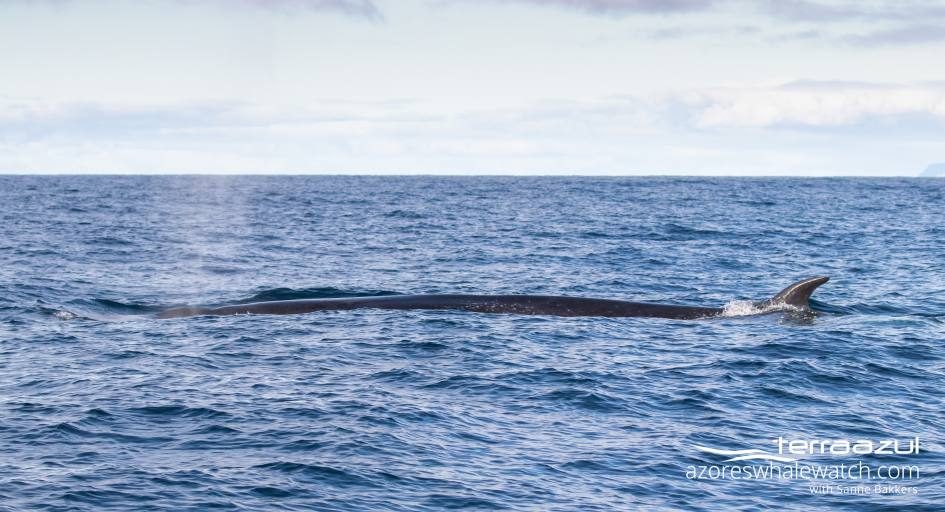 On our way back, however, we came across another group of common dolphins. We could not resist and we stopped for a few minutes to enjoy the sight of at least 100 dolphins slowly swimming east. Some joined us on our bow to enjoy the pressure waves. In this exact moment, an animal with grey stripes appeared out of the blue. Surprise, surprise…a Striped Dolphin (Stenella coeruleoalba) mixed in with the common dolphins! There may have been more striped dolphins hiding in the aggregation of common dolphins, but at this point there was no time left to have a better look at the group. The striped dolphin was not the last surprise of the day. As we circled around the islet of Vila Franca do Campo, we suddenly spotted an Osprey (Pandion haliaetus)! A fish-eating bird of prey that is a rare visitor in the Azores, wow. 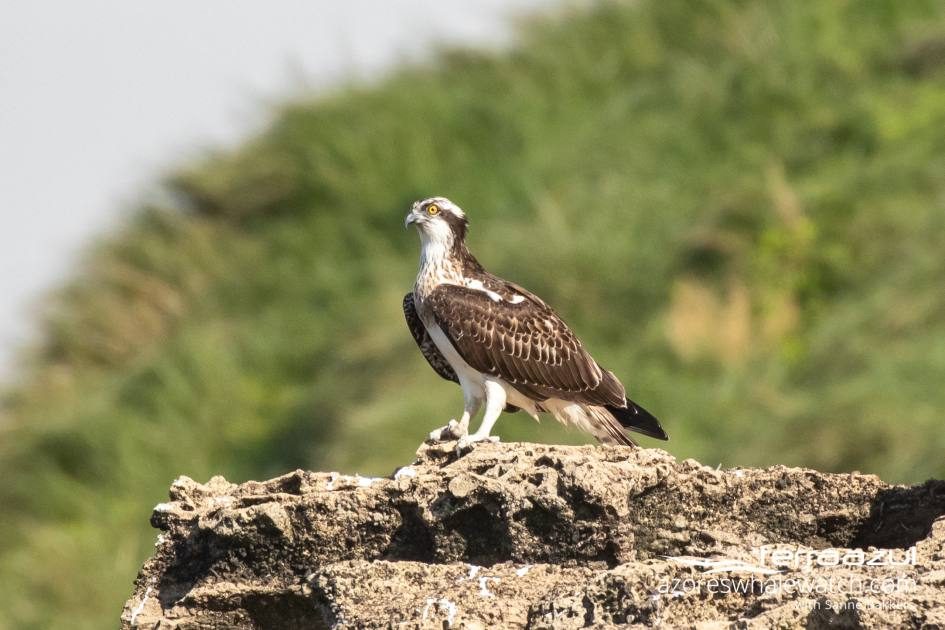 Osprey (Pandion haliaetus) perched on a rocky cliff on the islet of Vila Franca do Campo.

Check our blog soon to read about another interesting recent bird observation!