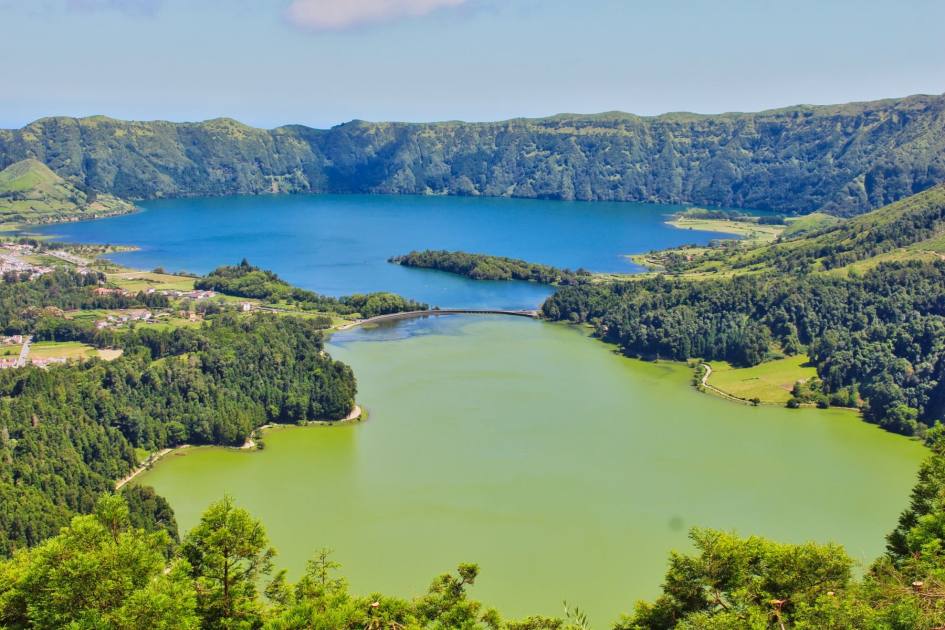 Possibly the symbol of São Miguel Island, Sete Cidades volcanic complex and its lake is for sure the most photographed landscape of this island, being elected one of the 7 wonders of Portugal.

It is one of the largest calderas in the Azores with a diameter of 5 km. Studies confirm 17 eruptions that occurred over the last 5,000 years. Volcanic activity included Plinian and hydro-magmatic eruptions, both very explosive. Other effusive and less explosive eruptions occurred along the flanks of the volcano due to the presence of radial faults. The last eruption occurred between 500 and 100 years BP originating the small Caldeira Seca. No secondary volcanic activity (hotsprings, geysers..) has been registered in the area. Few hot springs are located on the coast, in Ponta da Ferraria and Mosteiros beach (www.ivar.azores.gov.pt). 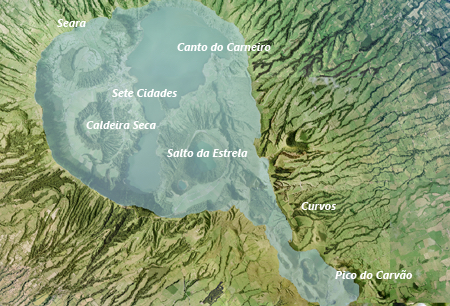 Inside the caldera there are three lakes, of which the largest one is divided by an isthmus made by humans. The two parts of the lake are characteristically blue and green. It is this different coloration that inspired the famous legend on the formation of this lake, legend that inspired our title 🙂

It is told that a young shepherd with green eyes and a beautiful princess with blue eyes were in love with each other’s, but due to their different social status they couldn’t stay together. From the tears of the two lovers the two lakes were formed. Such romantic version of the formation of Sete Cidades lake leads to another poetic landscape creation. The princess, deeply sad threw her ring into the ocean, and in that spot arose the little beauty we all know as the Islet of Vila Franca do Campo otherwise called the Princess Ring

Even if the origin of this volcanic complex has more to do with strong explosions rather than heartfelt feelings, the landscape with its green shadows and gentle curves is a true joy for the eyes of nature lovers. Here, it is possible to spot endemic bird species such as the Azorean blackbird, Turdus merula azorica and the Azorean goldcrest, Regulus regulus azoricus, but also occasional visitors during their migration. Endemic flora includes the Azores juniper, Juniper brevifolia, heather, Erica azorica, and wild lettuce Lactuca watsoniana.

You won’t find any whales or dolphins in the lake, but it is anyway worth a visit! 😉