Somewhere around 25 nautical miles off the shores of Vila Franca do Campo, life (and wildlife) goes on.

No humans or boats in sight, as it often happens in the Far East of the South Coast of São Miguel Island. We stand on the edge of the abyss, almost 3000 meters of water under our feet. And suddenly a loud hissing sound, it seems like a steam tank is taking off from the Ocean!

Our lookouts told us that they were blowing strong and high, something was going on.

And there they are: Four Fin Whales (Balaenoptera physalus), three on the chase, one to be chased, most likely a female. Little is know about the mating behavior of these leviathans but this was almost looking like a heat run of Humpback Whales (Megaptera novaeangliae). The individuals in the back lunge towards the front one, sometimes swimming sideways, and break the water with impressive force. The chase is sustained – swimming speeds exceeds the 30 km/h! -and the respiration pattern reflects this huge energy effort. This is why Fin Whales earned the nickname of “greyhound of the sea”. One individual is readily recognizable from its triangular notched fin. Nevertheless, it carries several scars on its back, some round and others longitudinal. They might be the results of contact with other individuals.

Who knows, maybe next year we will have the pleasure to meet the result of this encounter 😉 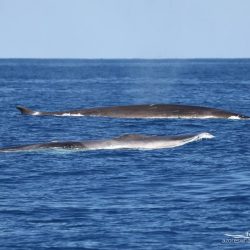 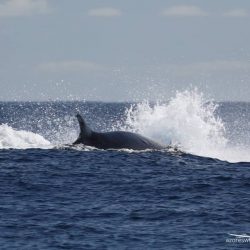 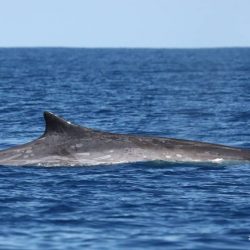 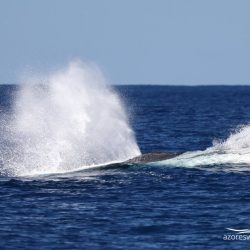