A baleen whale in summer :)

What is doing a baleen whale in the Azores at this time of the year? We already said goodbye to baleen whales as summer was approaching, but since nature is unpredictable today for our pleasure we had the chance to welcome them again 🙂

In both tours likely it was a Bryde’s whale. “Likely” because the only way to confirm it would be seeing the head with its typical three ridges that only Bryde’s whales have, and since we couldn’t see it we used other cues such as: a tall falcate dorsal fin, a dark grey coloration, an irregular surfacing pattern and most of all the fact that appeared at this time of the year. Bryde’s whales in fact, do not perform long migrations like the other baleen whales and in the Gulf of California this species appears to be resident. They tend to stay in waters of about 16ºC or more, so their presence at this time of the year eventually wouldn’t be so strange. Nevertheless, it was still surprising as we don’t get to see many Bryde’s whales anyway 🙂

A likely Bryde’s whale with its falcate dorsal fin

A possible alternative for species identification could have been sei whale with which this species share the shape of the fin and the size.

To complete the tours we also saw a loggerhead turtle in the same area of the baleen whale and common and Atlantic spotted dolphins. The common dolphins in the afternoon were very close to the coast. They were particularly active and with many calves. The group was mostly tight all the time and stayed within the same area making it easier to observe it and to don’t loose its track. 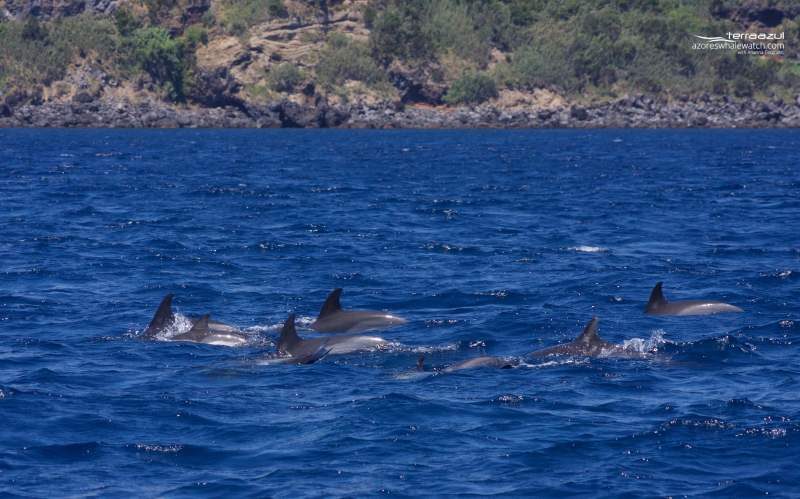 Group of common dolphins near the coast

Will we be able to see again the baleen whale tomorrow? Join us to find it out! 😉