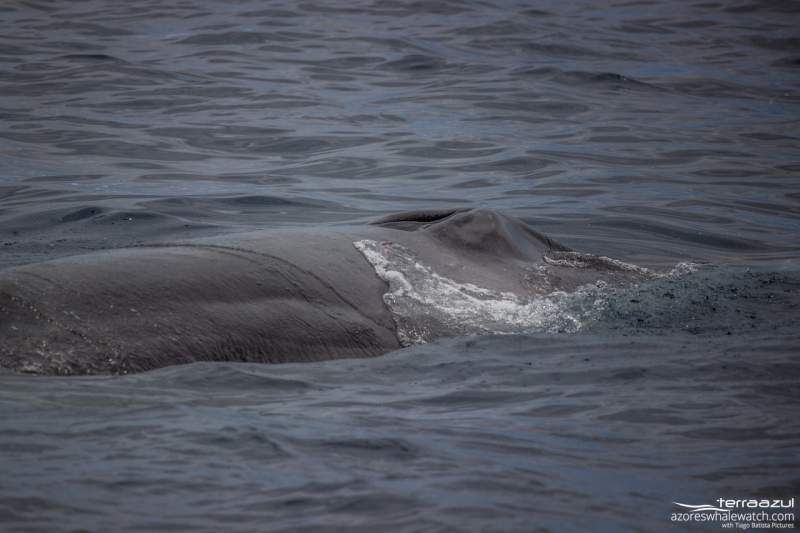 Hello friends of the sea!

I think this morning we had an extraordinary day. While we have been rocked by some swell on the sea, our lookout told us what was happening in the area we were in: he spotted around 30 whales, some of them even jumping! I guess the swell energized them somehow and they got really excited 🙂

Also we ourselfes have been really lucky: after enjoying the waves next to a pod of Common dolphins (Delphinus delphis), we saw an adult Sperm whale (Physeter macrocephalus). The animal rested on the surface for quite a bit and we could see the humps on the back, the location of the blowhole and even some of its rimpels on the sides! The Sperm whale then swam a little circle before taking a deep dive – a special moment for all of us, as we could see the whale-tail!

I did not even have the time to talk much about the sperm whales, as we immediately left to see a Fin whale (Balaenoptera physalus)which was coming up really close by. So no long waiting at all! The waves got a bit higher while we were watching, so it was quite good that our next stop was in an area where it felt a bit calmer. Before we reached the next area we had a little in-between-stop, and tried to tag the Loggerhead turtle (Caretta caretta) which was swimming here.

And what a sight! Left to the boat there was another Fin whale and on our right site… a Blue whale (Balaenoptera musculus)! I personally think it is really really special having the chance to compare both whales while just having to turn your head! And then we got a cherry on top of our salty cake: the Blue whale took a very deep dive and we had a glimpse of one of the largest flukes on this planet. (Big smile on my face now that I think back to this moment!)

I hope you are all well 🙂 Greetings from your guide Levina 🙂