This Risso’s sure does look enthusiastic!

Risso’s are known to be active. Displying behaviours has breaching(as seen in this picture), lobtailing, flipper-slapping and spyhopping. Although we don’t observe this behaviours every day, they are frequent.

Now onto some more specifics about this species.

Their body color lightens with age. The calves and juveniles are darker with a dark grey to brownish color. Adults become lighter and whiter with age. The whiter they are the older they are. That said, Risso’s Dolphins have a lifespan of about 35 years.

Risso’s have 2 to 7 pairs of teeth in the lower jaw which are used to capture prey. Their main diet is cephalopods. Usually they feed at night when their prey is closer to the surface. Although we have seen then stealing squids off the fishermen in broad day light! 🙂

Dives are usually between 1 or 2 minutes, but are capable of diving up to 30 minutes and up to 300 meters in depth. When diving may show the fluke.

Body scarring its extensive caused by teeth marks from confrontations with other Risso’s or other species. 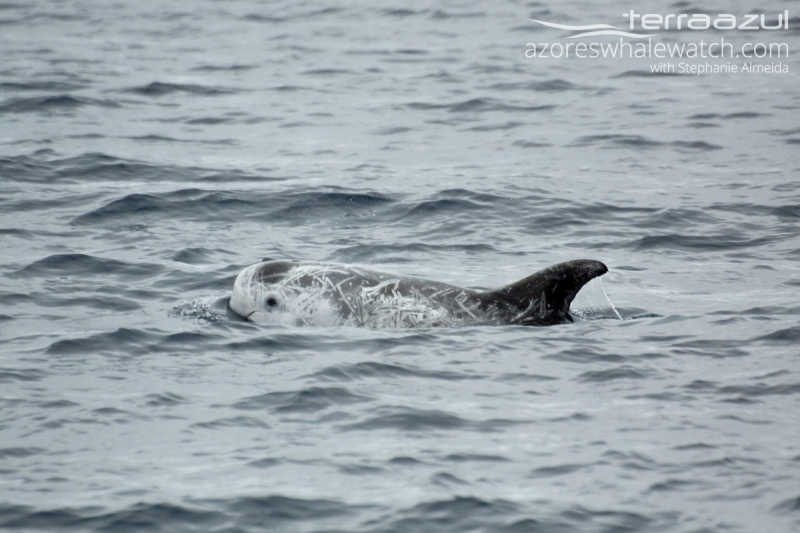 Groups can have from 3 to 50 individuals but can reach 150 in temporary gatherings.

The main threats to these species are entanglement in fishing gear and pollution.

In Japan they are still hunted every year. And a small number of this dolphins have been taken in captivity sucessfully.

Here, in Terra Azul, we are strong believers in NO CAPTIVITY. For all species of all animals, from Bottlenose Dolphins, Orcas, Risso’s Dolphins to Lions.