All Atlantic Spotted dolphins from Sao Miguel grouping together? 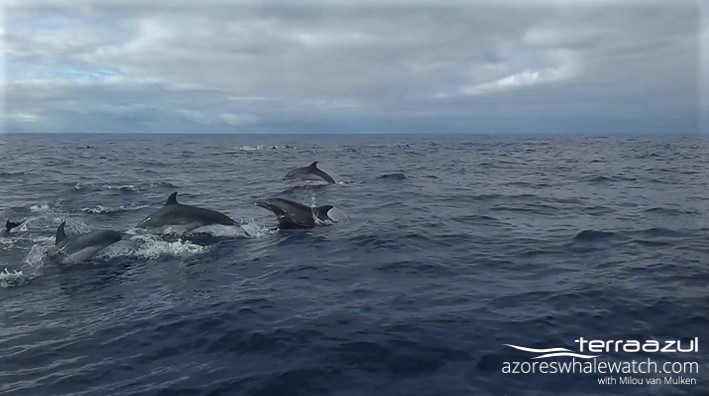 If you are a dolphin lover, you would have LOVED today! Just wait a second before to understand why. We actually started the morning quietly with a small group of the beautiful Risso’s dolphins. There were 2 fishing boats nearby and the crew aboard was happily waving to us and directing us to the dolphins. I’m sure they hoped the dolphins would stay with our boat once we arrived, instead of them stealing the fish from their hooks 😉 They is a very funny relationship between fisherman and Risso’s dolphins, and they always seem to be nearby each other!

Now for the dolphin lovers among you; after we left the Risso’s  dolphins, we had to go look for ourselves for more life, as it was hard for our lookouts to spot anything else. (weather conditions) luckily after about half an hour we suddenly spotted some jumps far away. The closer we got, the more activity we noticed, until we realized we just landed ourselves in a giant pod of Atlantic spotted dolphins. This was (one of) the largest pods we have seen this season. The longer we stayed, the larger the pod became. From an estimated 100 at first, we ended with an estimation of at least 400 dolphins. With such a high number it is hard to actually count, so it might has well been over 600 animals. Wow! It was the most spectacular thing to watch. They were racing on high speed around our boat and as far as you could look for a very long time. (The photo below is just moment capture and doesn’t show well how many dolphins there had been) 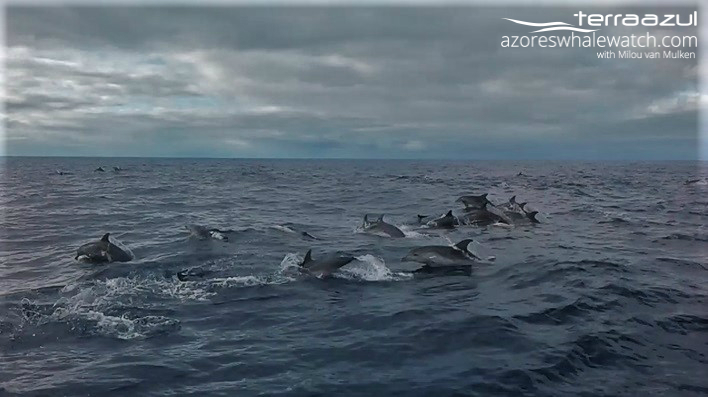 After the Spotties, we moved towards land where we found a good group of Bottlenose dolphins that were feeding right in the middle of a large group of Cory shearwaters. As usual the birds were almost landing on top of the dolphins, and the dolphins were almost riding over the birds. That’s how busy it gets when everyone is feeding 🙂