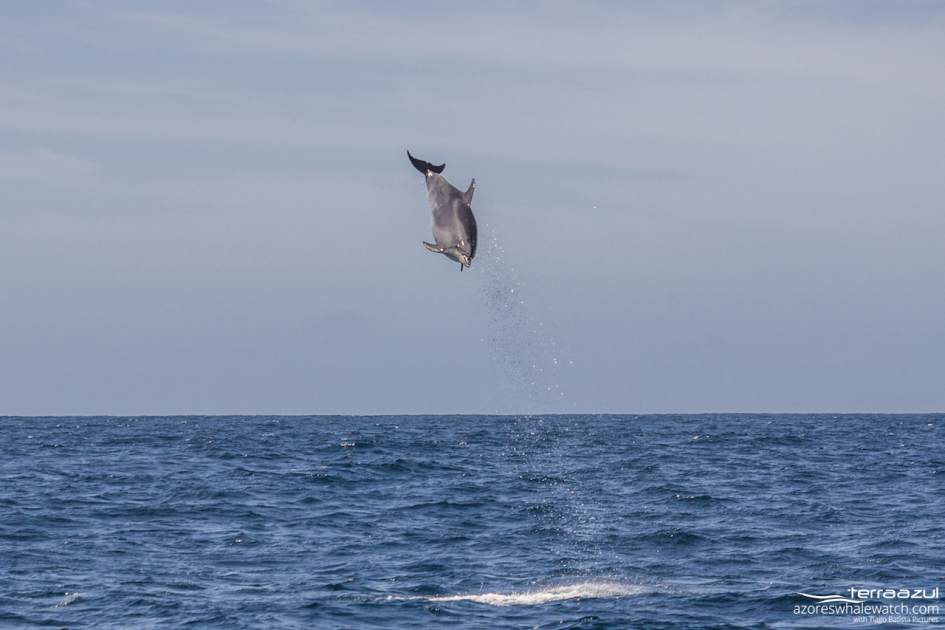 We all know that Bottlenose dolphins are commonly seen in captivated parks like Sea Worls, but flying through the air is defenitely in their genes, and not just being trained. However they can, most often they are pretty quiet and just showing their upper body while surfacing for air. Today on our second tour, something else was going on…

It seemed like several groups were meeting each other, and on top of that it was feeding time. The dolphins were flying through the air for a period of at least 40 minutes. Jumps of more than 6 meters were happening many times, and fish was being chased right below the surface as we could see them.

Bottlenose dolphins are known for their perfectly synchronized jumps and synchronized surface behaviors, as you can see in this photo.
The group must have been consisted of at least 150 dolphins. This included large males, females and even small calves. We also saw some Portuguese Man o’ Wars again, which are polyps that actually sting pretty badly, and often get confused for jellyfish. The water was so clear that their tentacles were visible very well under water.

On our way back we even found 2 Loggerhead turtles, and we managed to capture our first turtle for a tagging program that we joined recently, so hurray to that! Tomorrow there will be a separated blog post with photos from these tags.

If you want to know the species names in your own language, just enter the scientific name (which is mentioned in the captions of the photo) in Google. Let’s meet soon for an adventure in the deep blue?