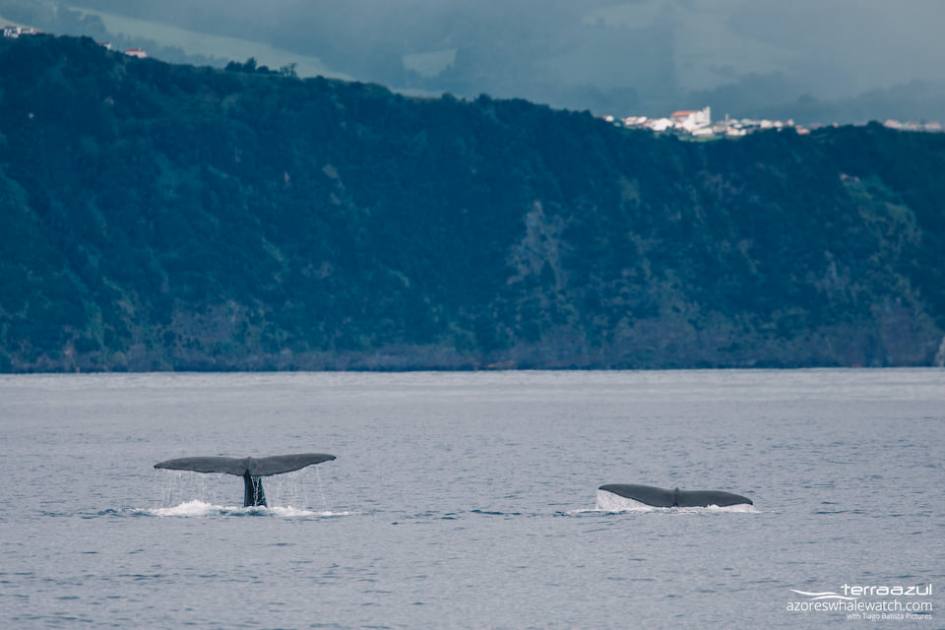 The ocean is an aquatic world full of wonders and surprises. Today once again we enjoyed the opportunity to explore its vastness and the marine life within. We began our morning with two groups of Risso’s Dolphins (Grampus griseus). The first group contained several females travelling around with their latest offspring. We recognised two of the females from previous sightings earlier this week. The second group appeared to be a mix of subadult and adult individuals in a very social mood. Later on we passed by some Atlantic Spotted Dolphins (Stenella frontalis), but we didn’t stop for them – we continued our path towards an area where the lookouts (vigias) spotted a family of Sperm Whales (Physeter macrocephalus). 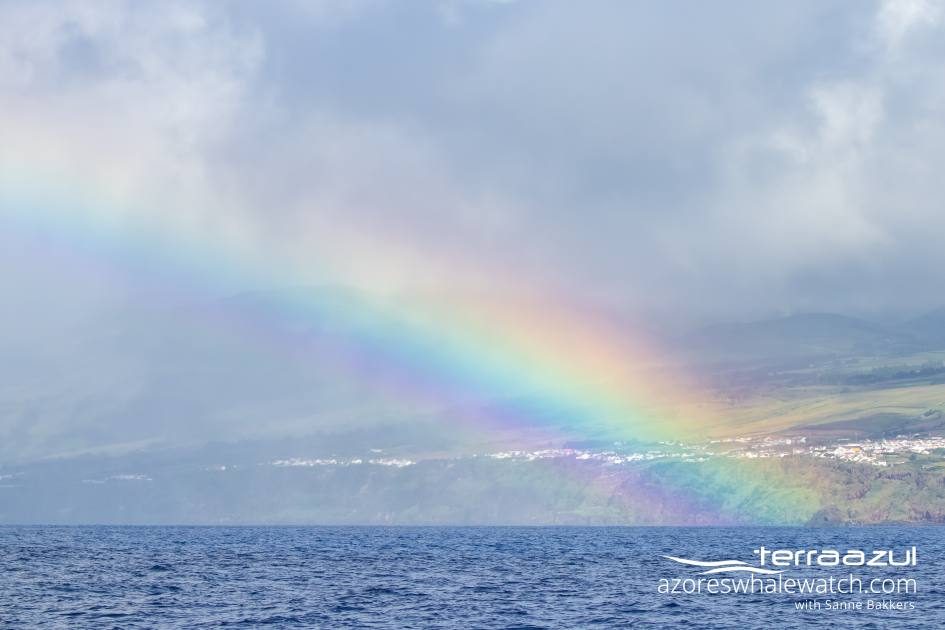 As we arrived to the “whale zone”, we immediately spotted a blow on the surface. We encountered a female resting at the surface in preparation for her next deep dive. After several minutes of watching her log around and breathing calmly, she arched her back and lifted up her tail flukes before diving. The first tail of the day – and many more followed! Soon after she disappeared from the surface, we discovered that there were two small calves alone by themselves resting on the surface. 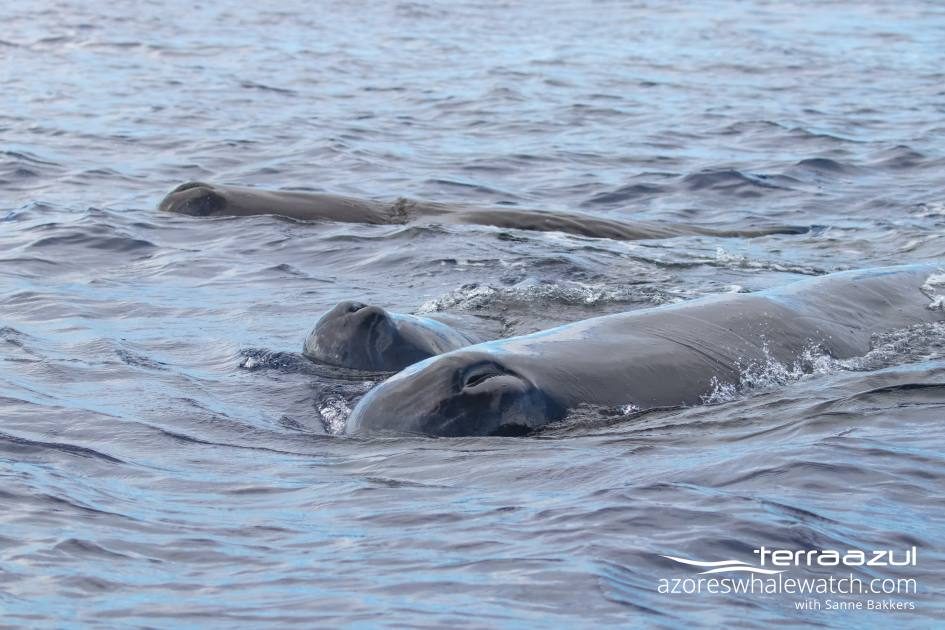 A once-in-a-lifetime experience for the whale watchers today: three sperm whales, including two calves, approaching our zodiac. Remember that these kinds of encounters are special and don’t occur often.

What happened next was completely unexpected and it left us thrilling with excitement. At one point, both calves went down for a shallow dive. With the engines off, we were waiting for them to return, but the first whale to return to the surface was not one of the calves…surprise, surprise, it was a large female! The two calves resurfaced too, flanking the female on her left and right side. A beautiful sight to see. When the three of them approached our zodiac, our excitement skyrocketed. It’s such a privilege and an amazing feeling to be in such close presence with these majestic animals! They approached us so closely that the droplets of the whale’s breath (blow) could be felt inside the boat. After this intense moment face-to-face with these ocean giants, we happily said our goodbyes and went back to find the group of Atlantic Spotted Dolphins from before. It turned out to be a very friendly group with lots of mother-calf pairs and juvenile individuals! 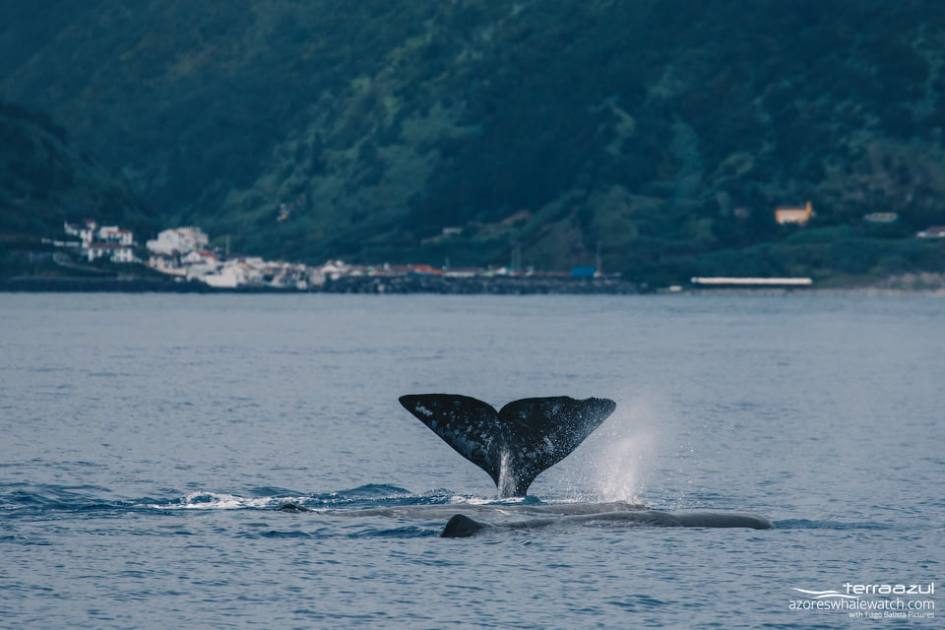 A family of sperm whales with one female diving down to forage in the deep ocean. 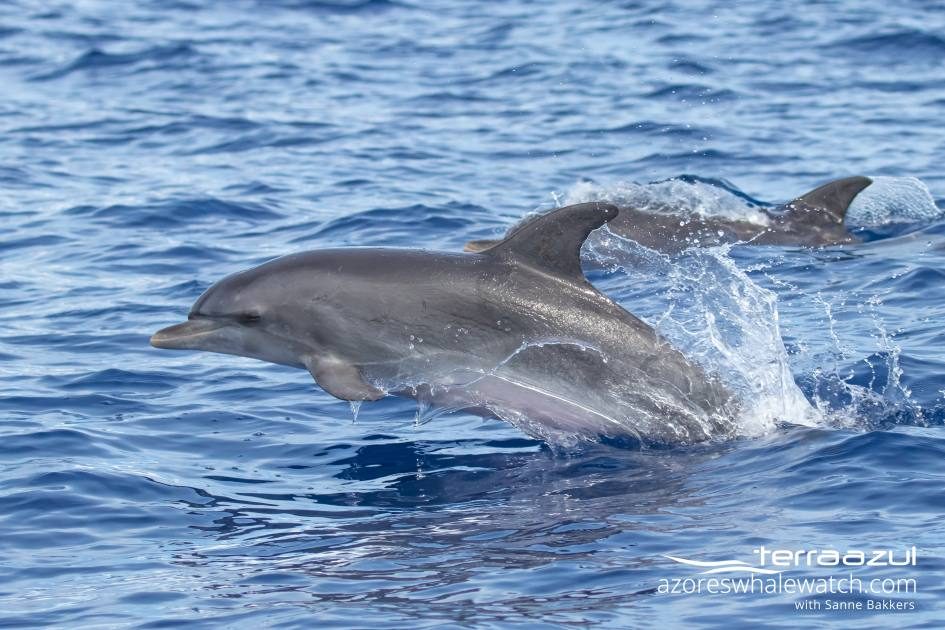 Atlantic spotted dolphin porpoising out of the water.

Later in the day, we encountered a variety of species as well: Sperm Whales, Atlantic Spotted Dolphins, Bottlenose Dolphins (Tursiops truncatus) and Common Dolphins (Delphinus delphis). Another amazing day here at Terra Azul in the middle of the North Atlantic Ocean!