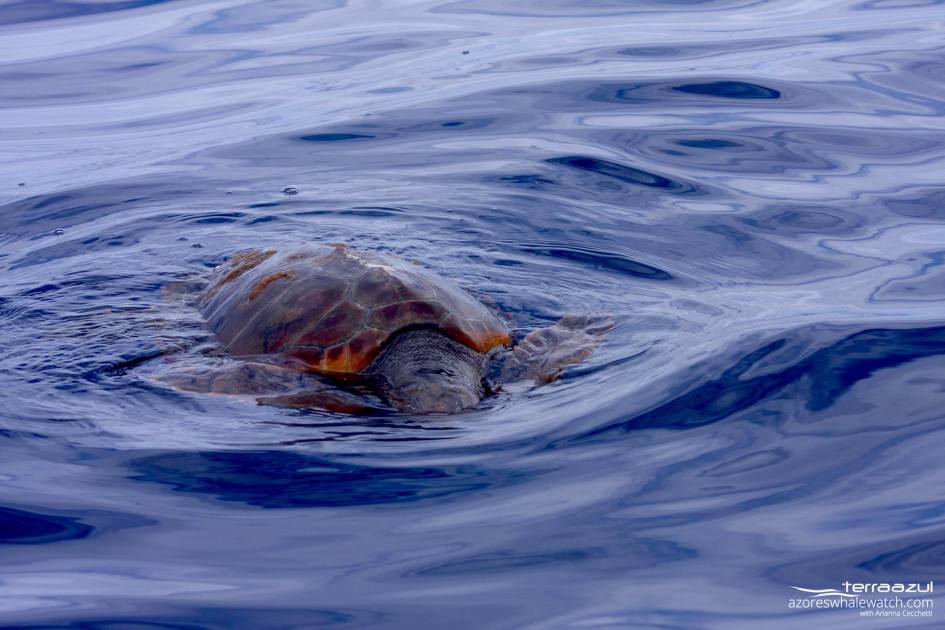 While cruising in Azorean waters it is possible to encounter a little fellow logging at the surface. If you are lucky it may stay there, but chances are it will quickly dive few meters below the surface to reappear further in distance. The loggerhead turtle is a well-known presence in the Azores and its records date back to 1595.

When we think of sea turtles we imagine the classical scene of a restless huge female turtle slowly approaching a safe place on a remote beach to lay its eggs and slowly returning back to the sea, leaving the eggs at their fate.

In the Azores we don’t see such a scene, not even we see large individuals, since the most frequent size is between 15 and 20 cm up to 40 cm. So, what are the turtles doing here? Similarly, researchers in the United States have been wondered where the little hatchlings of about 5 cm were going as they were disappearing into the ocean and seen no more. The late Archie Carr of the University of Florida, and one of the most re-known sea turtle researchers, got the missing puzzle piece from Dr. Helen Martins of Oceanography Department of the Azores (DOP) in 1984. The most frequent size classes observed in the Azores, in fact, could explain why the turtles recorded in the SE United States were only the tiny hatchlings and the huge (1m and more) nesting females.

Life cycle of loggerhead turtles in the North Atlantic. At its oceanic stage, this species visit the Azores 🙂 (source image: COSTA)

The tagging program was thus expecting to confirm the hypothesis that loggerhead turtles were spending the juvenile phase of their life in open ocean. The first tagging efforts were performed by the DOP and the Azorean Tuna Fleet, which just in the first 3 years were able to tag 731 turtles. Since 2015, DOP is collaborating with the Archie Carr Center for Sea Turte Research within the COSTA project aiming at the conservation of loggerhead turtles. The project, besides the tagging program, is currently focused on a longline fishery observer program aiming to minimize the problem of bycatch, one of the main threats for sea turtles.

Whale watching companies located in different islands of the Archipelago have also joined the efforts of COSTA. Among all parties engaged in such effort, in 2018 were tagged 86 turtles of which 4 were recaptured and since 2015 have been tagged about 300 turtles!

Terra Azul’s connection with the Florida University started in 2005, but for logistic reasons the collaboration got interrupted. In 2018 Terra Azul joined COSTA project reaffirming its interest in participating in the conservation of sea turtles and was able to tag three individuals.

Maps relative to the tagged turtles around the Azores. In 2018 four individuals were recaptured (red dots on the right map)

When a genuine aim in preserving the environment and its inhabitants is shared, collaboration comes natural. Such collaboration among different entities is often the key answer in conservation plans, for it allows faster and better results.