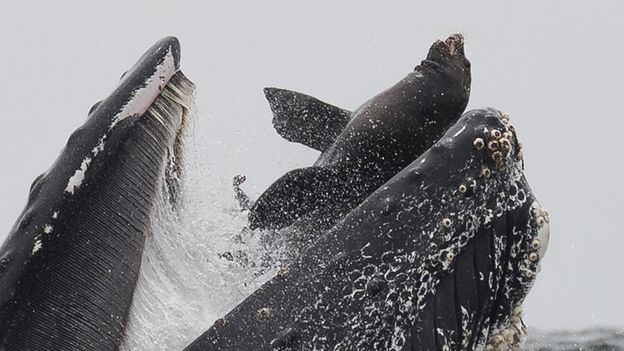 Have you ever seen a baleen whale “swallowing” a sea lion?

Today browsing through the internet, I found a picture of a sea lion being “swallowed” by a Humpback whale.

As some of you already know Humpback whales belong to a group of whales called Baleen whales, which entails that these animals do not have teeth but baleen plates instead made out of Keratin. These plates allow the whales to have a filter-like structure inside their mouths to trap small crustaceans and fish that belong to their diet.

But one of those amazing pictures that happen once in a life time was taken by a lucky biologist and photographer while on a whale watching tour in Monterey Bay, California. The photographer explains that the animals were feeding in the same area where a big colony of sea lions was also swimming.

So when gulp feeding vertically, took place by the whale, it encountered something bigger than an anchovy. 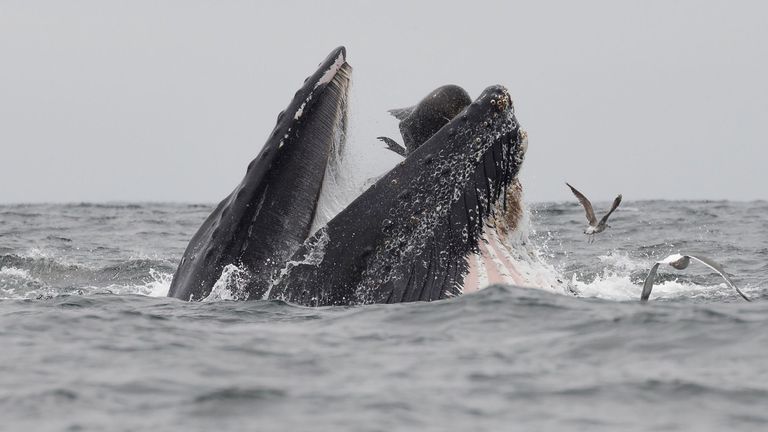 The biologist, Chase Dekker who took the picture states that the whale never really closed its jaw and the sea lion was able to swim away unharmed.

Nevertheless a one in a million picture that is worth sharing to all our cetacean lovers that have not seen this crazy photo.

I hope one day you might be lucky enough to be at the right place and at the right time to observe something incredible =) !