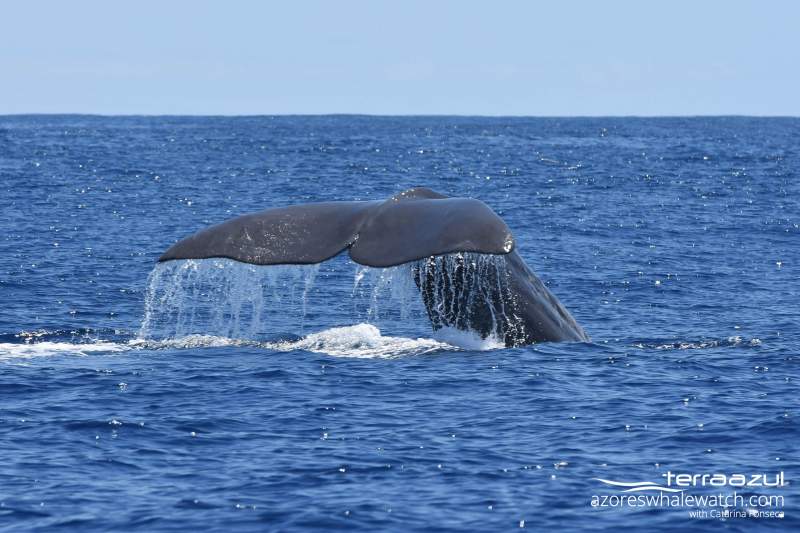 The day was spent in the company of the four resident species that can be seen in the Azores: the bottlenose dolphin, the common dolphin, the Risso’s dolphin and the sperm whale.

We first met a nice group of bottlenose dolphins heading  slowly towards West and swimming few times under the boat.  Then a couple of Risso’s dolphins appeared not too far and after surfacing few times they arched their backs and elegantly showed their tails before disappearing. A mother and a calf showed up just for a quick look and also disappeared in the blue, likely for foraging 🙂 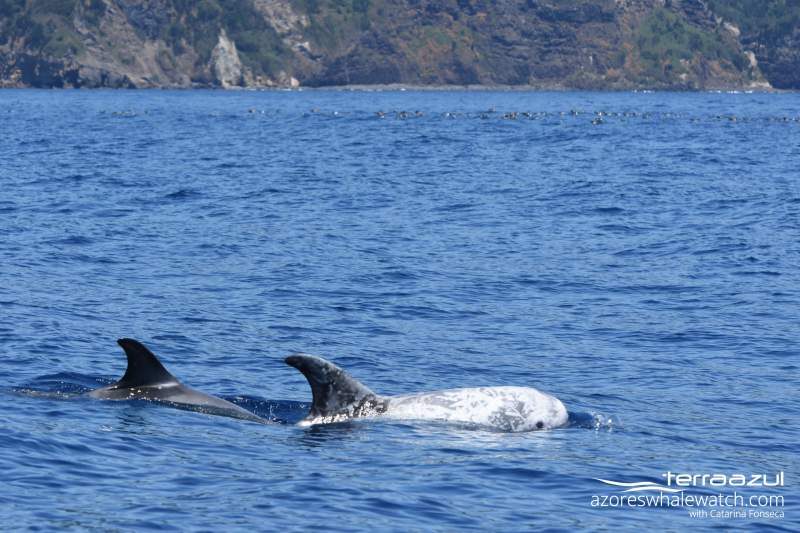 Since a sperm whale was sighted out of Ponta Delgada we started heading in that direction, and just before arriving to the area, we met a group of common dolphins with a mother and her newborn next to her.  The encounter had to be short as the sperm whale was already at the surface and could dive in any moment. In fact when we get there the whale started to arch its back and quickly went down leaving us with a short time to take a proper picture. We waited to see it again one more time until it took a second deep dive. 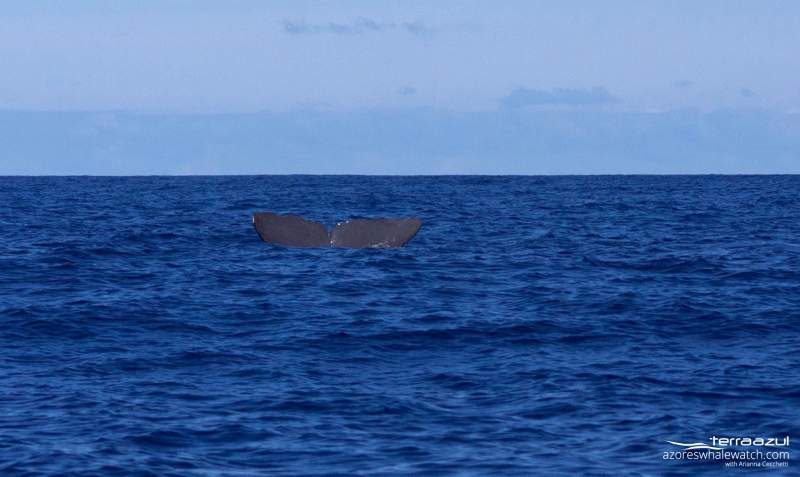 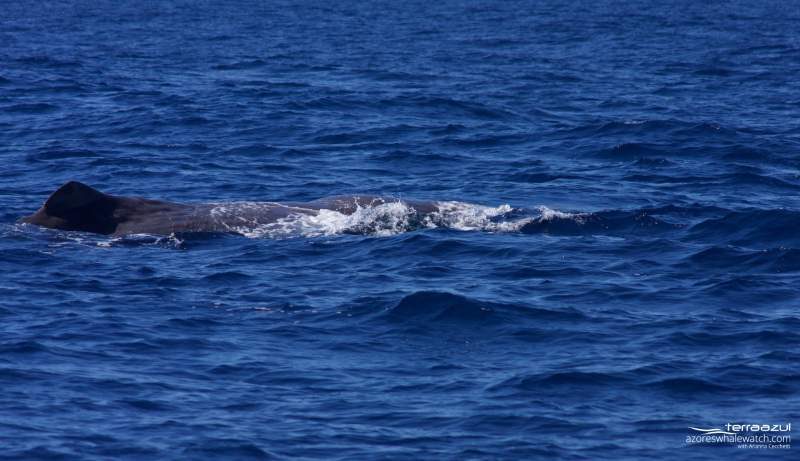 A group of common dolphins was located more to the east side of the island, they were taking breakfast with Cory’s Shearwaters so we took the opportunity to swim with them ! Individuals were a bit spread out at the beginning of the activity but after a while, they were tight all together to rest 🙂 It was a group of around 50 individuals, mostly composed by adults and juveniles, and they were swimming in a row. Swimmers could even swim on the top of the group when dolphins did shallow dives, some of them get curious and took a look at us for the happiness of everybody 😀

In the afternoon, everyone was travelling except the sperm whale that was still going for foraging dives off Ponta Delgada. It was kind enough to stay resting at the surface for a bit before diving, almost in slow motion, and giving everyone an amazing view of its tail! 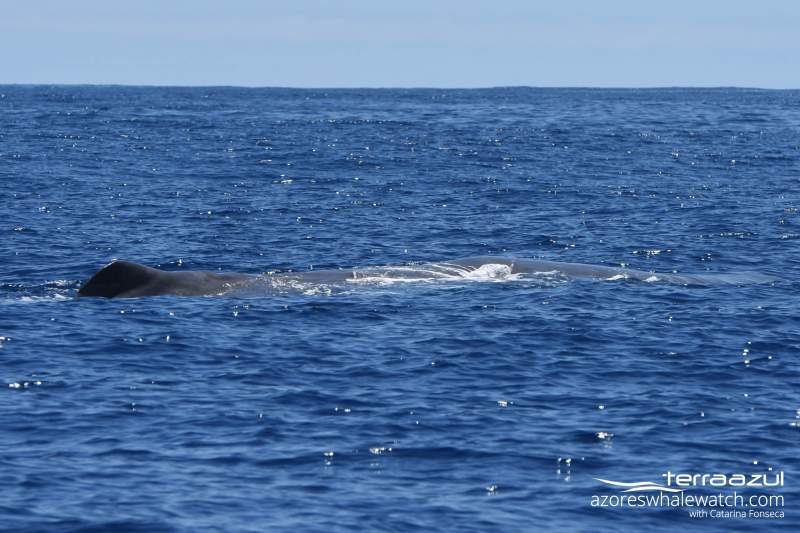 sperm whale resting at the surface after a long dive 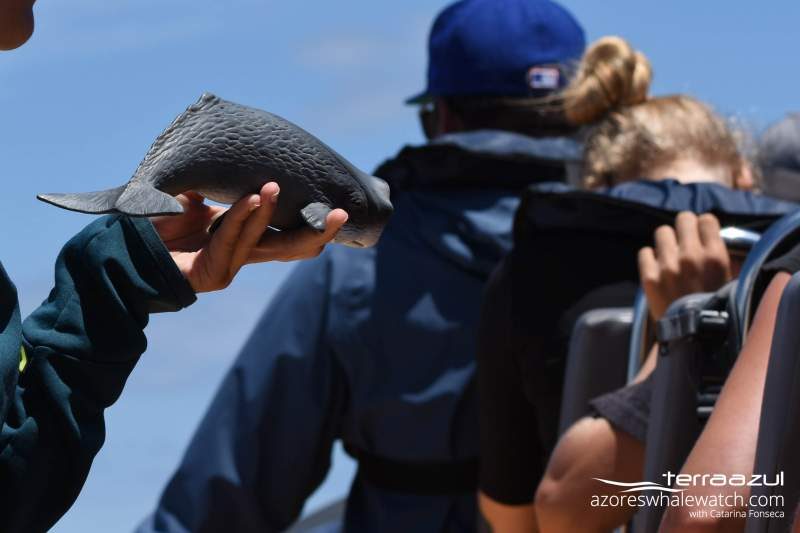 Mr. Whaly, always ready to help to demonstrate some information about Sperm whales

Later on, the Bottlenose were showing off their speed by slicing the water so fast you could barely see them! However, the common dolphins and Risso’s dolphins payed off by swimming very calmly close to the boat 🙂

Stay tuned for more news of our tours! 😀