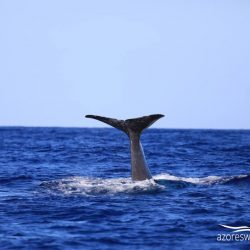 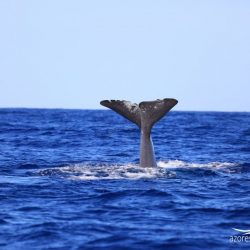 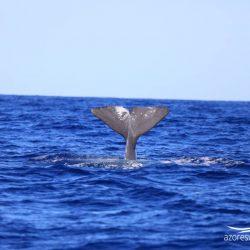 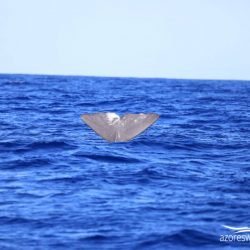 Sperm Whales (Physeter macrocephalus) are animals of extremes! They have unusually large body sizes, sexual dimorphism, the heaviest brain and the biggest head in the entire animal kingdom. They are also one of the deepest divers.

On our tour this morning our guests were lucky to encounter 4 of them! The tour started with a sighting of a big bull (male Sperm Whale). When this one went for a deep dive, we were able to find an other bull further away. After this one also went down – most likely to find squid – we spent some time in the same area. Later on, they came back to the surface and we were also able to see 2 more individual young males.

In the slide show on top you can see one of them fluking. Perfect pictures to use for photo-identification. Fluke marks vary individually according to age, sex and also geographically caused by predators.

One of our boats this morning also came across a small pod of Risso’s Dolphins (Grampus griseus). They were travelling quite fast to the east.

In the afternoon we saw the same group of Sperm Whales.