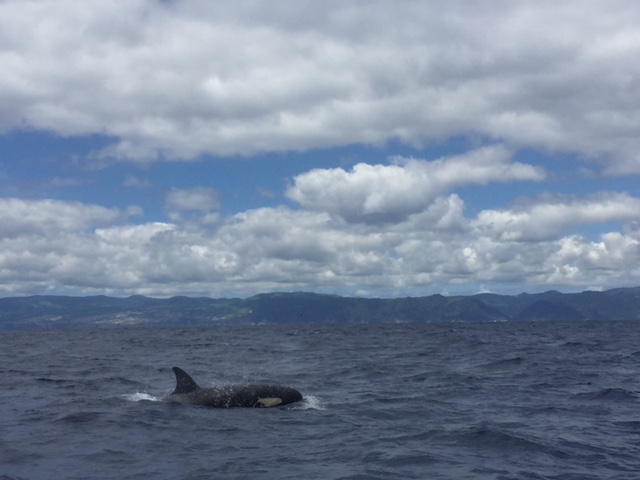 When giving the briefing we always point at the picture of an Orca and then tell our guests what we know: that they appear in these waters but that this happens maybe 2 or 3 times a year and always really unsuspected. Well, and then comes the day and its happening and you are on the boat and they are THERE!

We left the harbour of Vila Franca and drove far out to the south-east, and first saw a female Killer Whale calf! While we watched it travelling close to the surface we all wondered why it was alone and where its family was. Our lookout then confirmed that he saw a male Killer Whale relatively close by, so after 20minutes with the calf we made our way through the waves (some of them where quite tall!) – and we saw him! It is amazing to watch the fin break through the water, seeing it rise and rise before the body follows. On the left side of the boat we could hear excited calls too – another Orca! This time a female. We could clearly see the different fins and enjoyed watching the two of them meet and continueing traveling next to each other. Such a special moment! I would be really happy if someone could send me a picture of this moment! Georgie Branch took the picture on top of this post 🙂 Thank you!

After half an hour we decided that the little family should have their privacy again 🙂 It was relatively easy leaving them too, as we heard some more good news.. What a day! After a short boat ride we had the chance to see a blue whale swimming right next to a fin whale! They stayed on the surface the entire time and we could see the length of their shadows and could also easily compare the two different colours and the shape of their dorsal fins.

For me, the time we spent on the ocean today just flew! Sooner than expected we had to turn, as we were really far out on the sea. On our way back we were surprised by the sight of a big Loggerhead turtle – the cherry on the cake, I think.

I allow myself to say this today: Nature is wonderful and crazy at the same time, we can call ourselfs really lucky to see so much amazingness from so close by! I am touched, and I will never forget this tour 🙂 !!