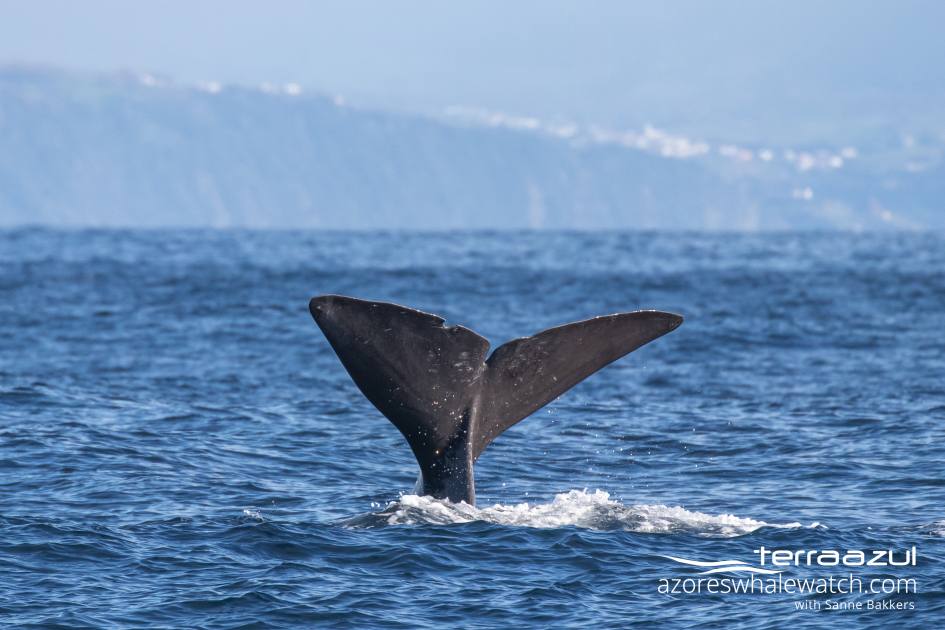 We are taking a small step back in time. To the last days of November to be more precise. We ended the month with three whaley good trips!

On the 29th of November, we were lucky enough to have two tours. We started our first tour with three Sperm Whales (Physeter macrocephalus) – one adult and two juveniles. We were given the chance to observe the elegant tail of the adult female before she went down for a foraging dive. Her flukes were very distinctive – missing both tips – and perfect for future identification. On our way back, we moved towards an area very close to the coast. To our delight, a group of Common Dolphins (Delphinus delphis) made an appearance. The group comprised only a handful of dolphins, but they were in a social mood and made many close passes to our boat. Turning back and back again to interact with our zodiac. 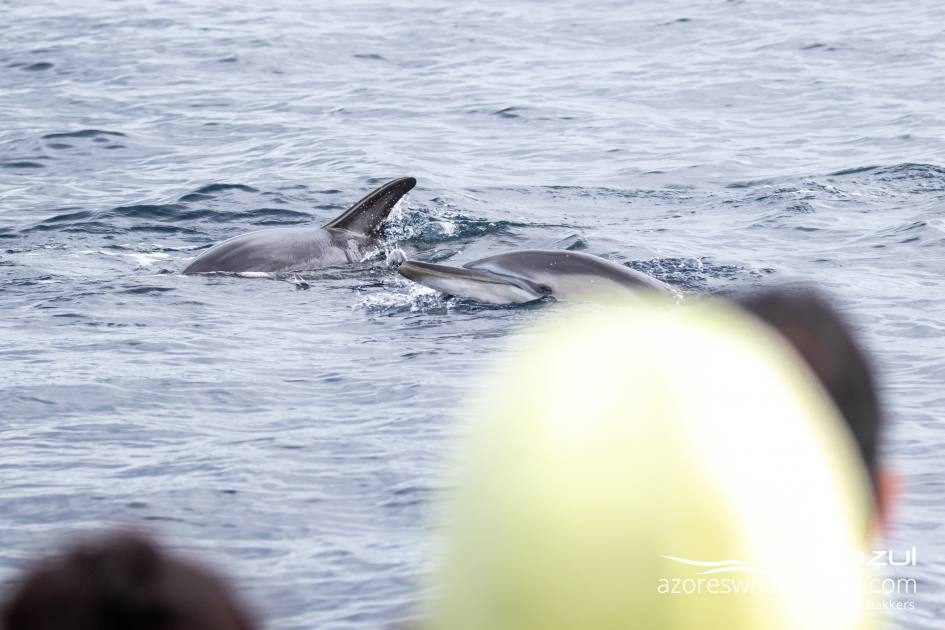 During the afternoon, we went somewhere completely different. Instead of heading southeast, we drove all the way to an area several miles off the coast, between Povoação and Faial da Terra. We learned quickly that this area was “cheio de cachalotes”. FULL OF SPERM WHALES! There must have been approximately 20 sperm whales.. Our directional hydrophone returned a concert of echolocation clicks, coming from multiple directions. Some were clicking nearby, others were much further away. We managed to see 12 whales: lots of adult females, some juveniles and three calves. The adult whales were in a feeding mode, which meant we got to see a lot of different tails going up into the air. Whales were popping up on the surface left and right, even when it was time to head back to port!

On the 30th, we were again granted the possibility to see both whales and dolphins. We began our tour with a sighting of common dolphins a few miles south of Ponta Garça. It was a pod of circa 20 adult and juvenile dolphins that were foraging in the area. Some of the individuals regularly porpoised out of the water, making it a lovely observation for our whale watchers. We could not spend too much time with the group, however, because another dolphin species was spotted off Lagoa. 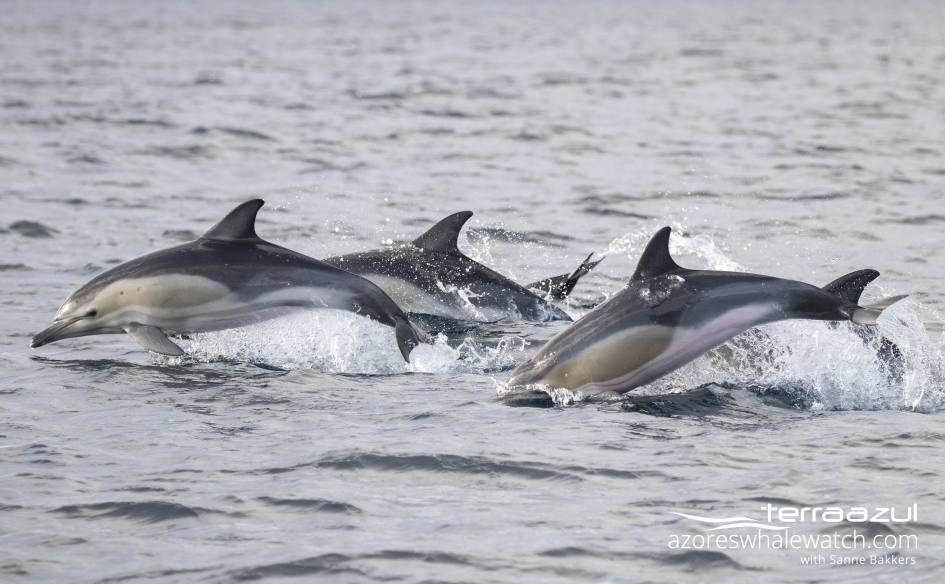 Upon arrival, we learned that it was a big aggregation of (at least 100!) Bottlenose Dolphins (Tursiops truncatus). Individuals of varying age classes were all over the place, covering a large area. The bottlenose dolphins showed curiosity towards our zodiac at the beginning of our sighting, but after several minutes we noticed that all individuals resumed their travels and social interactions. We decided it was a good moment to let the animals have their space, so we observed their behaviours from a greater distance. Even at a distance of 300 m it is a spectacular sight to see these large dolphins chasing one another and leaping out of the water simultaneously. 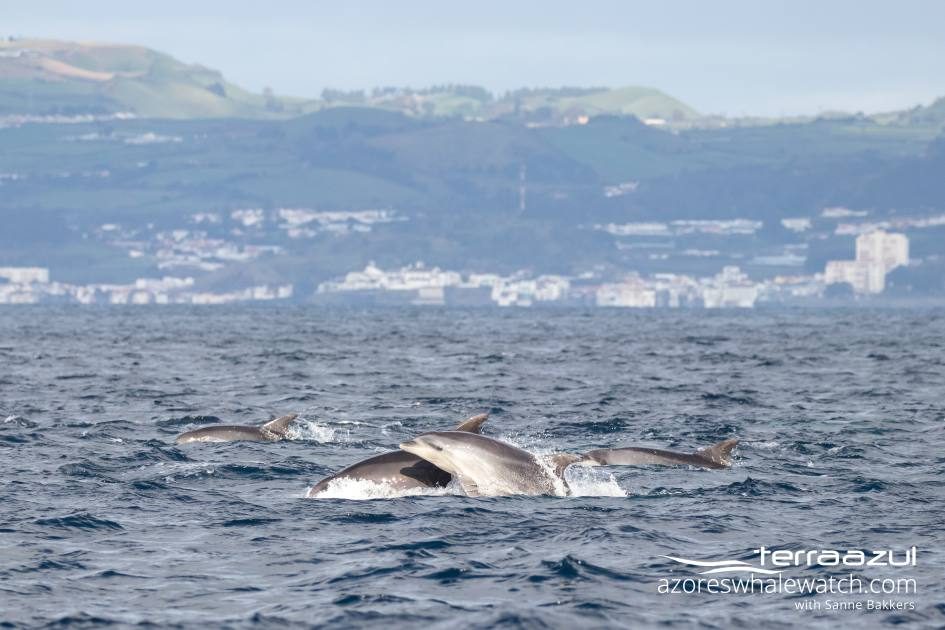 Bottlenose dolphins (Tursiops truncatus) on the move in front of Lagoa.

We do not often go far west of Vila Franca do Campo, but today was an exception. We believe that it is best to distribute São Miguel’s whale watching activity, avoiding other operators as much as possible, and thus reducing the boat pressure (physical presence and underwater noise) that is put on the whales and dolphins that we love so dearly. However, since we are now in the low season, there was no reason to have concerns. For our last sighting we travelled even further away from the harbour of Vila Franca do Campo, quite a few miles south of Lagoa. It was totally worth the effort, because this is where a family of sperm whales was spotted! In the little time that we had left, we managed to see four sperm whales. As we were watching two whales resting on the surface side-by-side, we noticed that one of them had a very interesting pigmentation mark on her back. This is how we learned that the sperm whale family that visited São Miguel in summer was “back in town”. We had some beautiful moments with this family last summer, including one of the calves approaching and rubbing against the side of our zodiac. We affectionately named him “August”. The last whale we came across was a young calf, but if this calf was also August, we could not confirm. 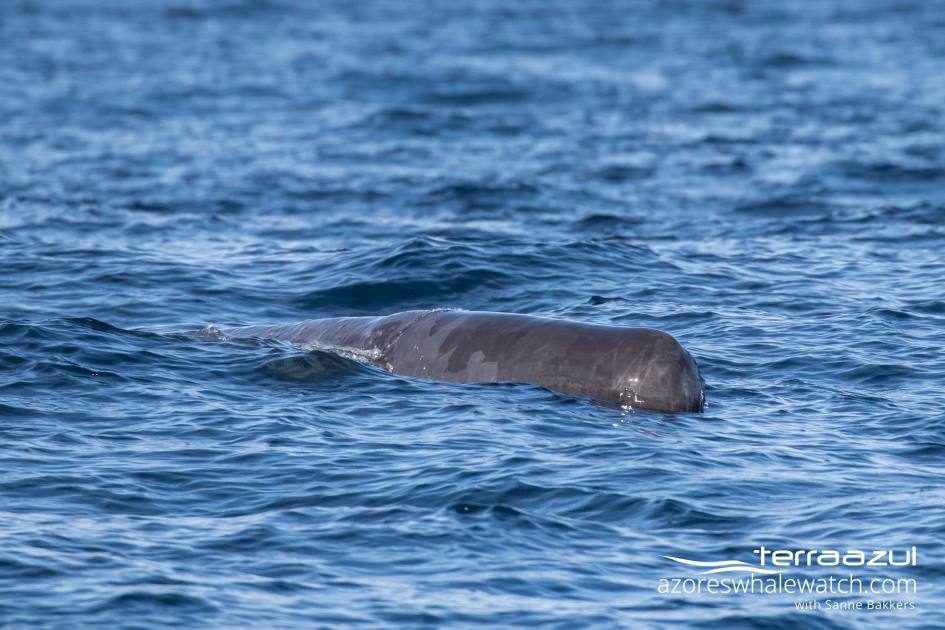 Sperm whale calf (Physeter macrocephalus) resting at the surface, waiting for its mother or other family member to resurface.