The second largest whale passed by! (including underwater footage!) 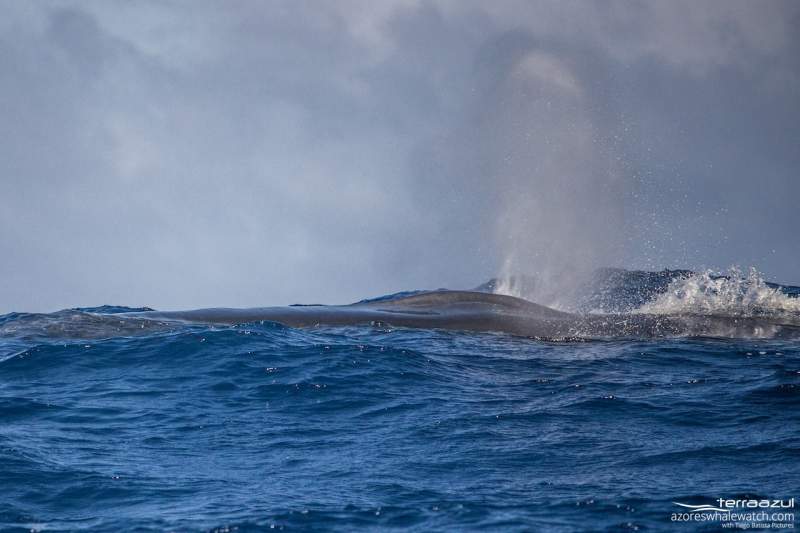 The morning tour headed towards the ocean with both boats. The sun accompanied us the whole tour. Near to the coast a group of Common Dolphins showed up. They were appearing on the surface and showed us their beautiful grey cape and the yellowish- greyish hourglass shape on their flanks.

A little bit more further outside we were able to see two fin whales. At the beginning they weren’t seen very often, but after a while the whales came closer to the boat. It was possible to see the two blowholes, that baleen whales have. In comparison to the baleen whales, the toothed whales and dolphins only have one.

Blowhole of a Fin whale (left) and common dolphin (right)

During the whole trip we were able to see some Portuguese Man O’ War. They are very beautiful to look at, but as for touching them… they are very poisonous! Their tentacles can grow very long and some individuals have tentacles of about 50 meters.

In the afternoon we went towards Povoaçao where we encountered 4 fin whales! 3 large adults and 1 juvenile. At first the whales were resting, just hanging beneath the watersurface without moving much. Their shadows were visible during all time. Then they slowly initiated their travel to the east, while surfacing for more then 30 minutes near to out boat! It was perfect whale watching.