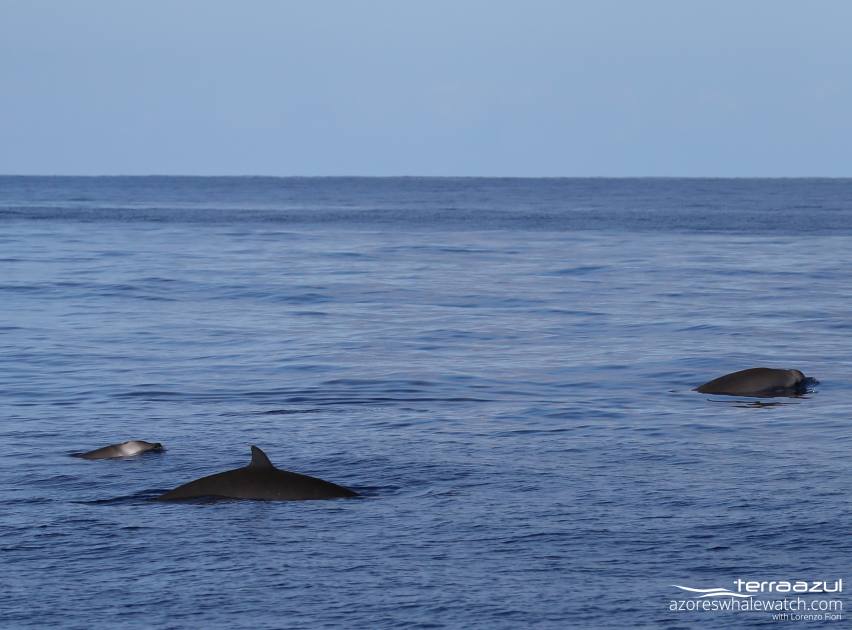 Even in these hard times we managed to explore the Ocean off Vila Franca do Campo and it is the time in the month when we update you with our monthly sightings. We encountered nine different species of whales and dolphins and, with the arrive of the Spring, the diversity of wildlife in our waters is overwhelming! On top of baleen whales, sperm whales, dolphins and beaked whales, we had several sightings of Loggerhead Turtles (Caretta caretta) and large pelagic fish such as tunas and swordfish.

Common Dolphins (Delphinus delphis) have been seen mainly in small groups spread along the coast, and they are the most sighted species in March. We also encountered Bottlenose Dolphins (Tursiops truncatus) and Striped Dolphins (Stenella coerulaealba). Risso’s Dolphins (Grampus griseus) made their first appearance of the year: just outside the Marina of Vila Franca do Campo a group of juveniles was feeding around a squid fishing boat. This interaction often bring dolphins to steal the fishermen catch from the lines! 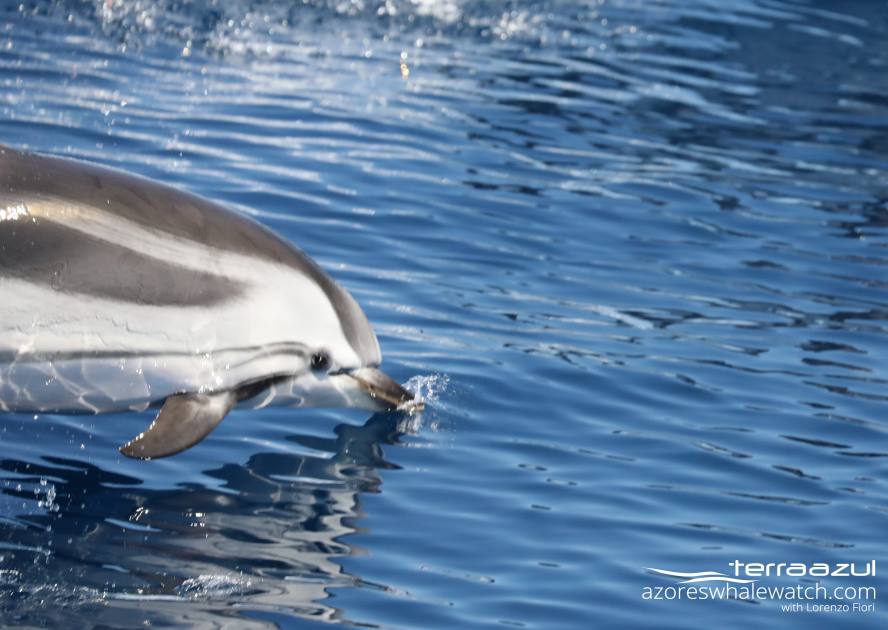 Moving to larger species, we got visited by a solitary male Sperm Whale (Physeter macrocephalus), and the migratory trend of Fin Whales (Balaenoptera physalus) did not disappoint us. We observed several individuals socializing and involved in unusual behaviors. Check our drone footage HERE! to have an aerial view on one of them!

We also spotted Humpback Whales (Megaptera novaeangliae), one from the boat and one, believe it or not, from our house window! 😀 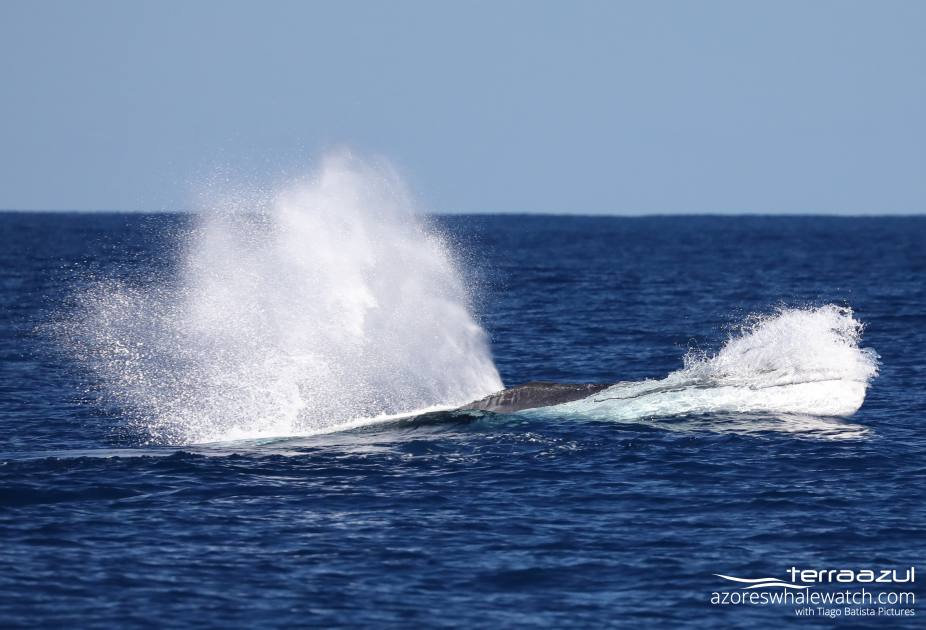 One of the several Fin Whales (Balaenoptera physalus) that are aggregating near São Miguel shores emerges during a socializing chase.

Calm Ocean conditions were ideal also to look for more elusive species at sea. Blainville’s Beaked Whales (Mesoplodon densirostris) appeared in a small group of around four individuals just a few miles off Vila Franca do Campo shores. With our great surprise, we even stumbled across a pod of True’s Beaked Whales (Mesoplodon mirus) that we managed to identify with some tech aid 😉 This beaked whale species is very rarely observed and we felt incredibly lucky to spend some time with a group including a little calf with its mother. 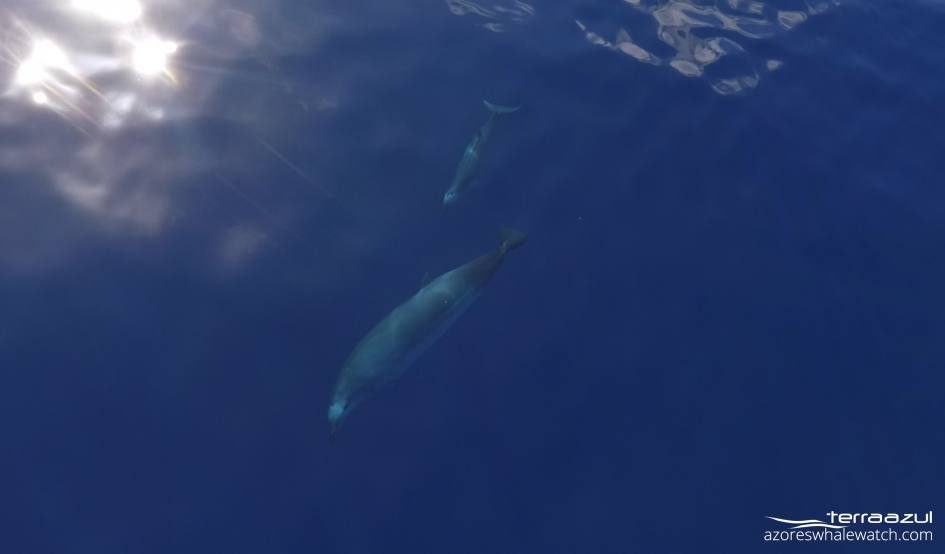 The aerial view on a mother and calf True’s Beaked Whale (Mesoplodon mirus) allowed to identify this rarely seen species.

Waters are filled with plankton organisms and large flotillas of Portuguese Man o’War (Physalia physalis) are populating the surface of the Ocean, attracting hungry Loggerhead Turtles that are feeding on them. In a single trip we counted at least five individuals! 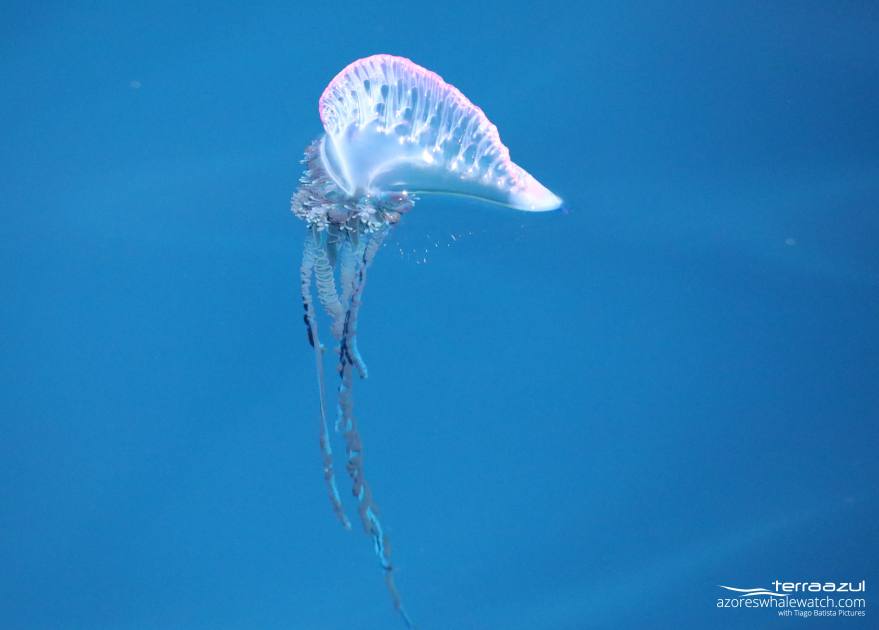 An amazing picture of a Portuguese Man o’War (Physalia physalis). The different parts of the colony are well distinguishable.

Finally, numbers of Cory’s Shearwaters (Calonectris borealis) are growing steady. Sometimes we observed them together with the smaller Manx Shearwater (Puffinus puffinus), which you can see in the picture below.

A Manx Shearwater (Puffinus puffinus) taking off after a feeding dive.

Hoping that these strange times will be a memory soon, we look forward to welcoming you in our beautiful Ocean once again 🙂